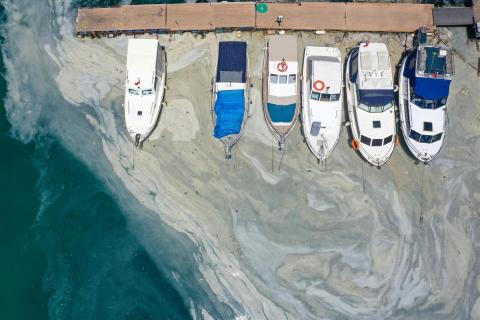 Turkish cleanup teams have collected a total of 3,288 cubic meters (116,114 cubic feet) of mucilage from the Marmara Sea in the last eight days, the country's environment and urbanization minister said on June 16.

Updating the public about the efforts conducted so far to clear out mucilage, or "sea snot," Murat Kurum said on Twitter that the cleanup operations were conducted in 193 locations.

"In 3,219 inspections we did as of June 15, we imposed total administrative fines of 10.49 million Turkish Liras ($1.22 million) on businesses that did not fulfill the necessary conditions," he said, adding that environmental laboratories were running analyses 24/7 on collected mucilage samples.

Mucilage is an overgrowth of microscopic algae called phytoplankton caused by rising seawater temperatures due to global warming, stagnant water and pollution.

On June 6, Turkish authorities announced a 22-point action plan to clear a surge of mucilage covering parts of the Marmara Sea in the country's northwest.

Mucilage mostly accumulated in Mudanya, Gemlik Bay, Gebze and its surroundings, the coastal areas of Istanbul's Anatolian side and around the Princes' Islands as well as partially covered the shores of the Marmara Sea.

The substance covering the central coast of the northwestern province of Yalova was dispersed by the wind to coastal areas of the Çınarcık and Armutlu districts as well as the town of Esenköy, which are some of the important touristic hubs.