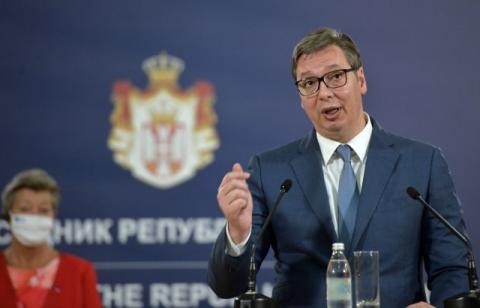 In the Presidency of Serbia, Serbian President and the European Commissioner discussed the Agreement on EU Support in Migration Management - the second phase for the improvement of reception capacities, protection services and access to education.
The agreement was signed in their presence by the Minister for European Integration Jadranka Joksimovi, the Head of the EU Delegation to Serbia, Ambassador Sem Fabrizi, and the representative of the International Organization for Migration (IOM) in Serbia, Lidija Markovi.
After the meeting, Vui said that there were talks on many topics and pointed out that 11 million euros had been allocated to our country. Speaking about migrants, the President of Serbia pointed out that our country, thanks to the efforts of workers, managed to vaccinate all migrants.
"I am grateful that the money was given to Serbia," Vucic said after signing the agreement.
Vui referred to the fight against organized crime, and pointed out that our country must do much more.
"When we will be rewarded, it is not up to us," Vucic said.
He said that our country has an obligation to take care of the displaced and pointed out that there are currently 3.977 people in reception centers, three times less than in some periods.
"We are ready to discuss all our obligations, in preventing illegal migrants, but also in a civilized way, by showing solidarity towards those who seek a better life. I have heard such nonsense... We must help these people and it is our obligation to treat them as human beings and to take care of them", President Vui said.
"Let's show the hospitable face of Serbia," said the President of Serbia and thanked for the allocated money.