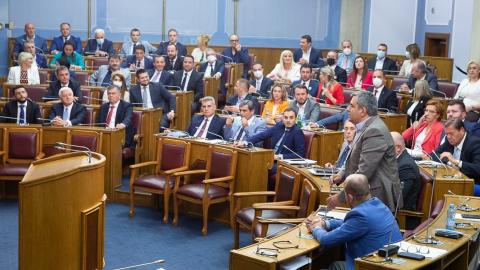 "I call on all those who received the votes of the citizens to get rid of the Democratic Party of Socialists to gather as soon as possible and make a decision on what to do next. Until then, we will not enter the parliament," Radunovic said. "We are now resetting the situation to zero and looking for a new deal," he added.

The pro-Serbian Democratic Front announced the boycott after its partners in the ruling Black on White bloc joined opposition MP's to back the Prime Minister's proposal to sack Minister of Justice Vladimir Leposavic for having queried the rulings of the Hague tribunal classifying the 1995 Srebrenica massacre in Bosnia as genocide. The massacre was carried out by Bosnian Serb forces.

On Thursday, the ruling Black on White and Peace is Our Nation coalitions, together with the opposition, adopted a resolution on recognizing the Srebrenica genocide, which prohibits public denial of the genocide and calls on the state institutions to investigate and prosecute war crimes.

While other members of For the Future of Montenegro also called for negotiations within the ruling majority, Black on White MP Milos Konatar said his bloc will not support the dismissal of PM Krivokapic.

"If someone wants to sack Prime Minister, they will have to search for partners on the other side. We have to get used to democracy and I do not see that the situation today is more critical than it was," Konatar told parliament.