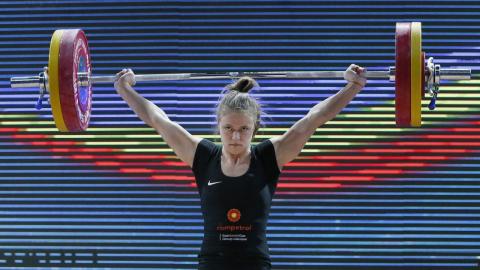 The ban effectively excludes Romanian four-times weightlifting European champion Loredana Toma from this summer's Olympics in Tokyo. The 26-year old was widely seen as a favourite to win the gold in the 64-kilogram category.

"The decision can be appealed and, at the moment, the Romanian federation is studying the possibility of undertaking the necessary steps [for an appeal before the Court of Arbitration for Sport]," FRH secretary general, Alexandru Padure, told BIRN on Friday.

He cited Toma's participation in the Tokyo Olympics as "the main motive" for the potential appeal. "At this stage, we are considering it," he added.

Toma, who won her fourth continental title and established a new European record with a deadlift of 114 kilograms in the 64-kilogram category last April, was the only weightlifter set to represent Romania in the Games, and one of Romania's best gold hopes at the delayed Tokyo 2020 games, which were postponed last summer due to the pandemic.

Romanian weightlifters first competed in the Olympic Games in 1952. Since then, they've only missed two gamers, in 1956 and 1968 and have brought back to Romania two gold, six silver and three bronze medals.

The ban issued against Romanian weightlifters has been prompted by the doping violations perpetrated by Romanian top athletes eight years ago.

"The FRH's case is grounded on five anti-doping rule violations committed in 2012 by five different athletes," the International Testing Agency, which...