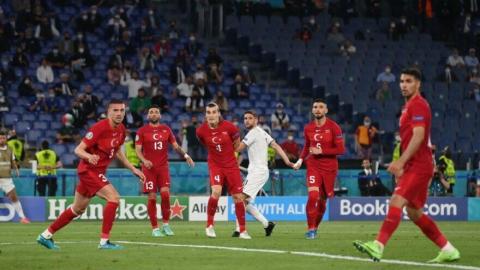 Turkey wants to end its Euro 2020 campaign on a high note when it plays Switzerland in a Group A game in Baku on June 20.

Turkey has yet to score a goal in the tournament with two losses in two games, 3-0 to Italy and 2-0 to Wales, and has lost its chances of finishing the group in the top two to advance.

A win over Switzerland will carry the country to third spot and pursue its very slim chances of becoming one of the four best third-placed teams that will advance in the six-group event.

The defeats by Italy and Wales also mean that Turkey has lost five of its last six matches at the Euro finals, failing to score in all of the last four defeats.

Despite coming to the finals picking up 23 points in 10 games, conceding only three goals and capturing a win and a draw against group leader France, Turkey's performances at Euro 2020 has been nowhere near what was expected from its young squad.

"This seems to be a difficult qualification for us now," Turkey coach Şenol Güneş admitted after the loss against Wales.

"We could not score a goal in two games, we could not win points, of course we are sad. But this team can play much better than this."

Güneş also said that the inexperience of the players may have played a role in the failure.

The squad, the youngest of the tournament with an average age of 24.9, includes only three players -- Hakan Çalhanoğlu, Ozan Tufan and Burak Yılmaz -- who played at Euro 2016, the last major tournament Turkey qualified for.

"We will play more of these tournaments and the players will be much better," said Güneş.

Switzerland, on the other hand, will advance to...