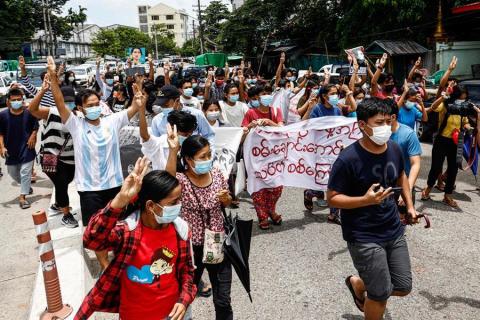 The U.N. General Assembly on June 18 took the rare step of calling on member states to "prevent the flow of arms" into Myanmar, part of a non-binding resolution condemning the military coup in the violence-wracked country.

The resolution - which did not go so far as to call for a global arms embargo - also demands that the military "immediately stop all violence against peaceful demonstrators."

It was approved by 119 countries, with 36 abstaining including China, Myanmar's main ally. Only one country, Belarus, voted against it.
This came on the same day that the Security Council was holding informal talks on the situation in the Southeast Asian nation, where the military ousted civilian leader Aung San Suu Kyi on February 1.
The resolution was not passed by consensus, as had been hoped, but rather through a vote, forcing all 193 U.N. countries to reveal their views.
In a quirk of history, Myanmar's envoy to the world body, Kyaw Moe Tun, voted in favor of the text. He has passionately rejected the coup and brushed aside the junta's claims that he no longer represents Myanmar. The United Nations still considers him as the rightful envoy.

After the vote, the diplomat voiced regret that it had taken three months for the Assembly to adopt the resolution and that it was not more explicit about an arms embargo.
Among the countries that abstained were Russia and Mali, where a second military coup in less than a year recently took place, Iran and Egypt, and Brunei, Cambodia, Laos and Thailand.
The U.N. General Assembly very rarely adopts resolutions condemning military coups or calling for limits on the arms supplied to the target country.
"It is the broadest and most universal condemnation of the situation in Myanmar...