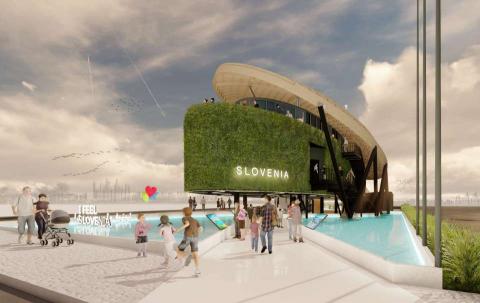 Ljubljana – Expo 2020, to be held in Dubai from October 2021 to March 2022, will be a record-breaking world exhibition. Slovenia and Slovenian companies will have an opportunity for excellent promotion and a long-term positioning in the Middle East and beyond, the country’s Expo commissioner general Matic Volk says.

More than 70 Slovenian companies have already registered for Expo 2020 while the goal is to have more than 100, with at least 14 business delegations planned, Volk has told the STA in an interview.

“The delegations will be supported by visits by senior politicians and other guests, among them athletes, which is something we’re well known for in the United Arab Emirates, also thanks to Tadej Pogačar, Primož Roglič, Luka Dončič and Jan Oblak, to name but a few.”

Promotion will be enhanced with a range of events and business activities taking place at the Slovenian pavilion, which the country took over in January.

Slovenia will also try to use to the maximum its EU presidency in July-December, including to host some of the EU events on the EU’s day at the exhibition.

“Every participating country has its national day. Slovenia’s is on 8 February and the EU’s on 23 October. Since the EU does not have its own pavilion, it has invited member states to host events at their pavilions on that day. We’re in talks with the European Commission … to host several activities at our pavilion.”

Slovenia is also in talks with France as the EU presiding country after Slovenia on a joint event, says Volk.

Slovenia being export-oriented, every opportunity for promotion where it is not strongly present is potential to be tapped into, says the commissioner general.

Expo will host three major business forums focussing on South America, Africa and Asia, alongside the Middle East, which Volk sees as a major opportunity.

He says there is considerable interest among companies: “We’ve noticed that Expo’s potential has been recognised by firms from all sectors and of all sizes.”

The country’s programme will be divided into eleven thematic segments to coincide with the Expo’s themes in focus.

“Slovenian companies are relatively evenly represented in each of the segments, while some more queries have been recorded in the healthcare segment.”

The organisers of Slovenia’s Expo promotion work with each company on a case-by-case basis to identity the best solutions for their promotion.

The Slovenian Enterprise Fund is also offering vouchers to enable the participating companies to get up to 60% of their costs refunded.

Although Expo’s Dubai organisers have set up an online platform to look for potential business partners, “we’re aware this is not enough, so we’re looking for additional contacts and opportunities to enable each company the best possible result”.

Slovenia is for instance in contact with the Dubai Chamber of Commerce and Industry and chambers of other emirates, with the focus not only on Dubai, but broader.

Volk believes appearing at Expo can pay off in the future. “Dubai is doing everything for the long-run and Expo is also the first step towards a long-term positioning.”

Once Expo is over, District 2020 is planned on the site for startups and scaleups, and Slovenia intends to continue its presence in these markers after it.

“Let’s hope the companies use the opportunities offered by Expo to maximise their results in the long-run,” Volk says.

Since Expo also wants to attract members of the general public, airline Flydubai will introduce a Ljubljana-Dubai route in September, while Slovenian tour operators are already offering package holidays associated with Expo. “Demand is high and we believe it will further rise as Expo gets closer,” Volk has told the STA.