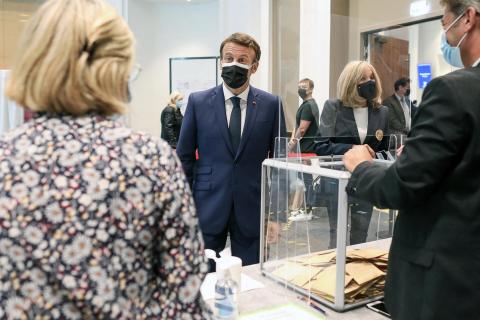 The party of France's far-right leader Marine Le Pen performed weaker than expected in the first round of regional elections on June 20, in a vote marked by record levels of abstention.

"Our voters didn't turn out," Le Pen said in her first comments after the vote from her stronghold of Henin-Beaumont in northern France. "I call on them to respond urgently."

Although she was not standing for election herself, she had been hoping for a strong party performance to give her momentum ahead of next year's presidential and parliamentary elections.

The vote for new assemblies in mainland France's 13 regions and 96 departments takes place over two consecutive Sundays, with a second run-off vote scheduled for June 27.

It is hard to predict the ultimate winners on the basis of the first round because of the complicated electoral system and the impact of tactical voting, which usually sees mainstream parties gang up to keep the far-right out of power.

Polls last week had suggested the National Rally would finish top in six regions in the first round, possibly putting it on course to win at least one of them for the first time in its history.

The party's best hope was in the southeastern Provence-Alpes-Cote d'Azur - home to Marseille, Saint-Tropez and Cannes - where its campaign was fronted by Thierry Mariani.

But Mariani performance did not appear to have met pre-vote polling figures: early results showed him neck-and-neck with the current head of the region, Renaud Muselier from the Republicans.

France probes use of NSO spyware; Macron a possible target