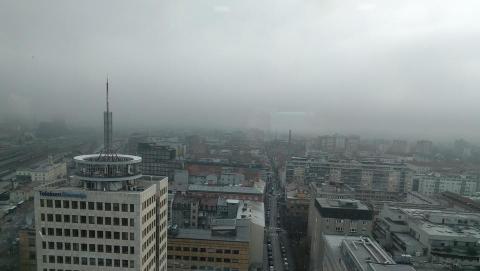 Brussels – The European Environment Agency (EEA) has launched the city air quality viewer, which has taken data from two Slovenian cities, Ljubljana and Maribor. The latest data show that the Slovenian capital is plagued by poor air quality, whereas the situation is a bit better in Slovenia’s second largest city.

Ljubljana ranked 260th in the air pollution ranking, whereas Maribor placed 212th. The EEA took data from 323 cities across Europe, among which 127 had acceptable particulate matter (PM 2.5) levels.

In Ljubljana, the EEA recorded 16.2 micrograms per cubic metre of air, ranking Slovenia’s capital among the cities with poor air quality.

Meanwhile, Maribor has moderate air quality as its PM 2.5 levels were at 12.9 micrograms per cubic metre of air.

“Air pollution is a severe problem in numerous European cities and poses a real health risk,” the agency warned on the occasion of releasing the new air pollution data last week.

The web viewer allows people to check air quality levels in major European cities in the past two years and compare their cities with other across Europe.

The top three cleanest cities in Europe in 2019 and 2020 were Umea in Sweden, Tampere in Finland and Funchal in Portugal. On the other hand, the most polluted air could be found in Nowy Sacz in Poland, Cremona in Italy and Slavonski Brod in Croatia.

The EEA has noted that air quality in Europe has improved significantly in the past decade, however air pollution still caused 417,000 premature deaths in 41 European countries in 2018.