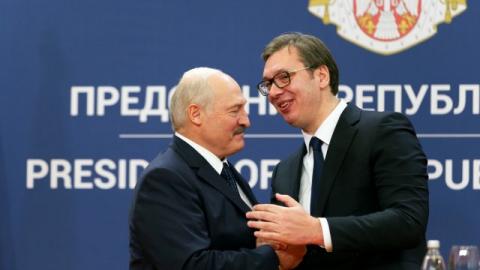 The Council of Europe on Monday said several EU candidate countries in the Balkans had aligned themselves with the Council Decision to strengthen restrictive measures on Belarus by introducing a ban on the overflight of EU airspace and access to EU airports of Belarusian carriers of all kinds.

Those countries are North Macedonia, Montenegro, Albania and, perhaps surprisingly, Serbia - a country with traditionally friendly relations with Belarus.

All these states will be required to deny permission to any aircraft operated by Belarusian air carriers to land in, take off from or overfly their territories.

"They will ensure that their national policies conform to this Council Decision. The European Union takes note of this commitment and welcomes it," the statement of the European Council said.

The EU adopted this decision on June 4 after a Ryanair flight from Athens to Vilnius was hijacked by Belarus authorities while crossing Belarus's airspace, reportedly on President Alesander Lukashenko's orders, using a false bomb alert and a fighter jet to force the flight carrying opposition activist Roman Protasevich to land in Minsk. The security services then boarded the plane and arrested him.

Serbian officials have not made any statements yet about aligning with the EU's sanctions.

Serbia and Belarus traditionally had friendly relations. Belarus has consistently opposed recognition of Kosovo's independence -  a hot issue for Serbia - and voted against Kosovo joining the UN cultural body UNESCO in 2015.

However, in August 2020 Serbia backed an EU declaration saying that the presidential elections in Belarus were "neither free nor fair" and criticising the crackdown on post-electoral protests.