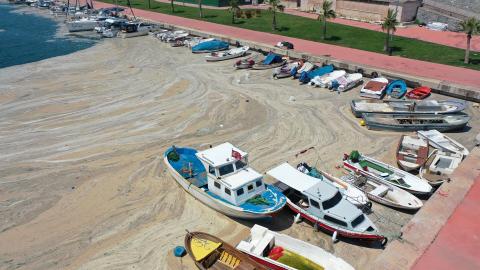 Turkey will use oxygenation technology to protect the Sea of Marmara from mucilage, also known as sea snot, as part of the country's clean-up campaign launched earlier this month, said the environment minister on June 21.

"On Tuesday, June 22, we will deliver oxygen to the depth of 30 meters of the Sea of Marmara from 4 points in Körfez, Kocaeli, and another area in Pendik Marina," Murat Kurum announced on Twitter.

He went on to say that the aim is to increase the dissolved oxygen in the depths of the Sea of Marmara with advanced oxygenation devices.

"With the pilot scheme, we will carry out a study like the cases abroad," Kurum added.

Mucilage is an overgrowth of microscopic algae called phytoplankton caused by rising seawater temperatures due to global warming, stagnant water, and pollution.

This year, mucilage or "sea snot" was detected in January and then intensified and expanded in April, resulting in a serious problem contrary to previous examples, which usually disappeared in a month or 45 days.

As it continued to increase in its intensity in May and June, the Turkish authorities announced a comprehensive action plan to clean up the Sea of Marmara on June 6.

As of June 20, Turkish sea-cleaning teams have collected a total of 4,555 cubic meters (160,858 cubic feet) of mucilage from the Sea of Marmara.