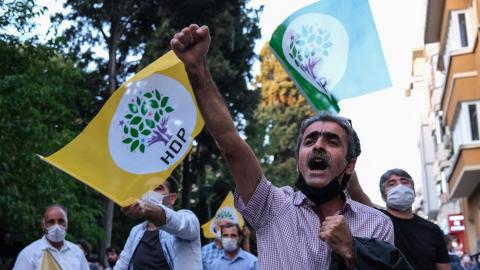 The country's top court conducted its first examination on Monday and unanimously agreed to accept the chief prosecutor's indictment and officially start the closure case.

"This is no surprise. The Constitutional Court had to accept the indictment because of [the government's] conspiracies against the HDP," Garo Paylan, deputy president of the HDP, told Halk TV on Monday.

"The ruling alliance of the Justice and Development Party, AKP, and the Nationalist Movement Party, MHP, which cannot stop HDP in elections and cannot stop its growth politically, are now trying to push the HDP out of politics with this kind of conspiracy," Paylan added.

Paylan added that such pressures also manifested themselves last week in Izmir, where an armed attacker entered the party's HQ under the eyes of police and killed a party staffer on June 17. The HDP accused the government of instigating such attacks.

In a written statement, the chief prosecutor said the HDP had committed crimes against the state and the unity of the country and its people.

This is not the first time a pro-Kurdish party has faced the threat of closure by law. It is the routine fate of Kurdish parties in Turkey. Until now, 23 Kurdish parties have been closed on various allegations, such as terrorism and ethnic separatism.

The HDP's predecessor, the Democratic Society Party, DTP, was closed in 2009 by order of the Constitutional Court. It ruled that the DTP had become "the focal point of activities against the indivisible unity of the state, the country and the nation".

As part of growing crackdown by President...