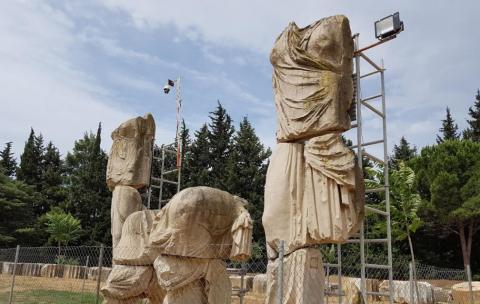 Excavations in Claros, the oldest oracle center in the world according to archaeological data, will continue for 12 months with the support of the Presidency of the Turkish Historical Society.

Stating that the restoration works of the cult statues will be started within the scope of this year's works, Onur Zunal, the scientific advisor of the Claros excavations, said that the temple revealed important data regarding the period.

Zunal said that it was believed that Alexander the Great built Smyrna, which is the modern-day İzmir, in consultation with the oracles in Claros.

The ancient city of Claros was discovered in 1907 in the Menderes district and is believed to be the oldest oracle center of antiquity. Restoration and conservation works of cult statues will start soon in the ancient city.

Considering the inscriptions uncovered during the excavations, it was determined that many oracles were made in Claros, which contributes to the development of faith tourism. Although it is located 80 kilometers away from İzmir, Claros has an intense visitor potential and hosts an average of 2,500 and 3,000 people in the summer months.

Stating that the temple in the ancient city reveals important data about the period, the Zunal said: "The person who was an oracle asked the questions coming from the cities by contacting the god and sent the answers he received to the secretariat. Then the answers were written on the stones here. Founding a city or entering a war was done with the permission of the gods. Noble, wealthy people also came here for their personal problems."

Biggest prophecy was about İzmir's foundation

Noting that the temple in Claros was seen as the house of the gods, Zunal said: "It is estimated...