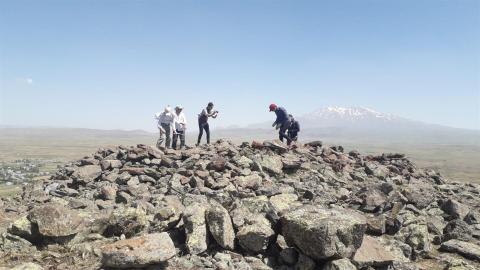 A group of Turkish academics started a study to determine the location of the Battle of Manzikert, a conflict that reverberates deeply every after many centuries in the soil of Anatolia and world history.

Continuing their work in an area of 150 square kilometers in the eastern province of Muş's Malazgirt town, experts examine historical sites in the district, especially the city walls and the historic Manzikert Castle.

After conducting research in the fields of archeology, art history, anthropology, geology, geophysics and geography, academics reported that they found four tombs, two of which were Muslim child tombs, as a result of excavations in the last two years.

As excavations get deeper, researchers aim to reach the finds containing war tools such as arrowheads, swords and shields.

On Aug. 26, 1071, the armies of the Seljuk Turks and the Byzantine Empire clashed on the plain of Manzikert in what is now Malazgirt. The battle concluded with a decisive and influential victory for the Seljuks.

The battle was one of the most significant turning points of medieval history, as after the Byzantines suffered this grievous blow, the gates of Anatolia swung fully open to Turkish domination.