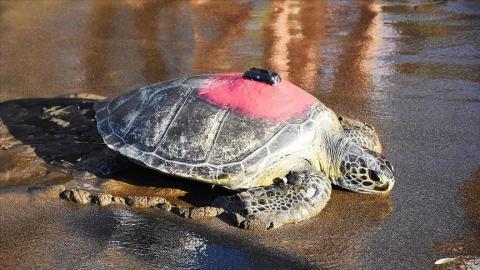 After receiving its treatment in the western province of Muğla, a green sea turtle, which is under the threat of extinction, was released to the sea three days ago with a satellite tracking device installed on it.

The green sea turtle was injured after swallowing a fishing rod and fishing line about nine months ago and was brought to the Sea Turtles Research, Rescue and Rehabilitation Center (DEKAMER) in the Dalyan neighborhood of Ortaca district.

Named Talay, the turtle is the first young green sea turtle to be tracked in Turkey, said the DEKAMER officials in a statement.

The turtle first reached Ekincik Bay by traveling 10 kilometers on the first day. At the end of three days, it was seen that Talay arrived in the Aksaz area in Marmaris by traveling 20 kilometers more.

In May 2019, a Caretta caretta named Tuba was set to the sea with a satellite tracking device installed on it and has traveled 10,000 kilometers since then.