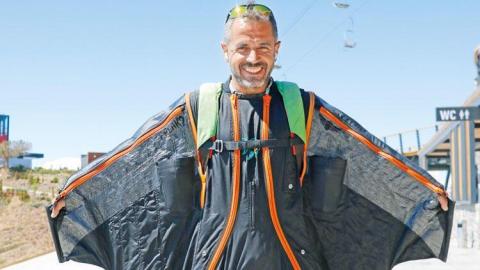 An official working at a cable car facility in Fethiye's Mount Babadağ flies his way to his house in his wingsuit every day after work.

Cengiz Koçak began parachuting in 1991 by jumping off from airplanes when he was a cadet and became a free-type paratrooper while serving as a non-commissioned officer in the Kayseri 1st Commando Brigade.

After his retirement, Koçak got interested in base jumping in 2011 and became a wingsuit athlete in Turkey with training he received in California.

Popular amongst his circle with the name "batman," Koçak participated in competitions on behalf of the Turkish Armed Forces and the national team and achieved many national and international successes in this field.

Koçak, who gained fame with the new jumping points he discovered for wingsuit base jump, started to work as general manager at Mount Babadağ Teleferik, a cable car facility in the Mediterranean province of Muğla's Fethiye district, 20 days ago.

Wingsuit flying from an altitude of nearly 2,000 meters from Mount Babadağ, where he takes the cable car every day for his job, Koçak lands to world-famous Blue Lagoon, known as Ölüdeniz in Turkish.

Koçak then gets in his car and reaches his house in the Ovacık neighborhood after a short journey.

Speaking to the state-run Anadolu Agency, Koçak said that he was the only athlete in the country who could perform a wingsuit jump as well as a base jump.

Taking him only three to four minutes to cover the distance, which otherwise takes 40 minutes by car, Koçak said performing wingsuit flying routine every day adds a lot of value to him and his sport.

Koçak expressed that many people worldwide who watched his videos he shared on social media wanted to come to Mount Babadağ and...