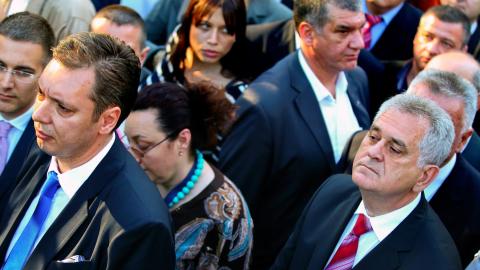 During the 13 years of the SNS's existence, only four of its officials were in conflict with the boss and had the "privilege" to feel all of Vucic's power. These four: Tomislav Nikolic, former president of the SNS and of Serbia, Nebojša Stefanovic, current Minister of Defence and two former MPs, Sasa Mirković and Vladimir Cvijan, (who meanwhile died under unexplained circumstances) are only isolated cases that arose on various occasions and in different periods.

There was no association, solidarity or united action between the four. With all of them, Vucic had a way to minimize their influence in the SNS and to keep them at a distance from the opposition parties. Mirkovic was convicted of financial fraud; Cvijan tried unsuccessfully to form his own political party, Stefanovic has been compromised through the regime media and Nikolic is completely isolated.

The founder of the SNS, Nikolic, although "anesthetized", represents the only real danger to Vucic. Nikolic is disappointed because Vucic's voting machinery did not put their trust him in 2017 to run for head of state for a second time. Vucic wanted that position, and his pressure on the membership was huge; even Nikolic's son did not have the courage to vote for his father.

In return, a dissatisfied Nikolic demanded that Vucic give him back the position of president of the SNS and entrust him with the position of prime minister. He got none of what he asked for. Vucic entrusted him to lead the overnight of the invented office of the National Council for Cooperation with the Russian Federation and China. That was the end of Nikolic's political career, but that does not mean that his ambitions have disappeared.