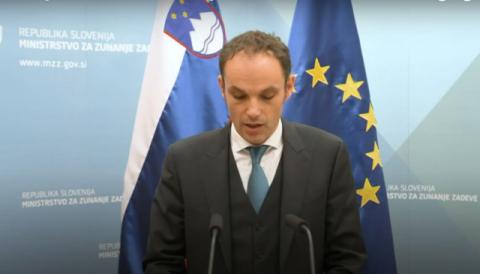 The EU needs to move "as soon as possible" from a wait-and-see approach to a problem-solving strategy in dealing with enlargement and the Western Balkans, said Slovenian Foreign Minister Anže Logar in an interview about the priorities for his country's upcoming EU Council presidency.

"We know that what happened is that third parties entered the region, some started to perform their strategic interests and this shows the vulnerability of the region for the EU, it is strategically dangerous," Logar said.

His comments could be seen as an indirect reference to China and Russia's vaccine and mask diplomacy in the height of the pandemic, which has raised eyebrows in Europe over their intentions in the region.

He stressed that the enlargement process "has to be viable, and those countries should be sure that if they fulfil certain goals, the next step, enlargement, will come for them", adding that this would especially refer to candidate countries Albania and North Macedonia.

Both countries' accession hopes hit a brick wall in 2019 after France and the Netherlands vetoed the start of membership talks over their lack of reform progress on improving democracy and fighting corruption.

The start of Skopje's accession talks was then blocked by Bulgaria in 2020 due to disputes over common history, national identity, and language, for lack of fulfillment by N.Macedonia of the mutual Agreement for "Friendship and Good Neighborliness" and persecution of people of Bulgarian ethnicity by North Macedonian authorities.

Bulgaria's decision was backed by all political parties in the country, and the current caretaker government has so far not changed that position. A new parliament after early elections due...