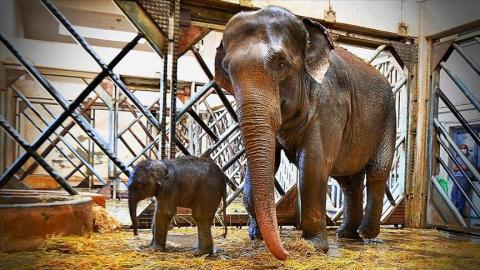 The İzmir Natural Life Park has announced the arrival of a new baby animal whose species is at risk in its respective natural habitat: A healthy Asian elephant.

No name has been given to the baby elephant yet.

Giving birth after about two years of gestation, Begümcan has two more calves named İzmir and Deniz (sea in Turkish) with Winner, the father elephant.

Speaking to the state-run Anadolu Agency, Şahin Afşin, the director of the park, said that the baby elephant was the newest member of the zoo for now.

"We've been waiting for her to give birth for days, and the baby has finally arrived. It was so cute and made us all extremely happy. The baby is healthy and quite active," Afşin said.

The baby elephant is being looked after indoors and will be taken to the open area, after which visitors will be able to see it.

It is the third time that an elephant was born at an İzmir zoo.

The offspring's 10-year-old big sister, İzmir, was the first Asian elephant born in Turkey and became the symbol of the park when shown to the public for the first time in 2011.

The Natural Life Park, built on an area of 4,125 square meters in Şaşalı in the western province of İzmir, hosts approximately 3,000 animals of 134 species brought from different parts of the world.