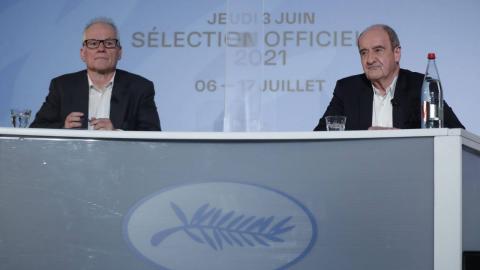 Reflecting the quality of filmmaking in the Balkans in recent years, three films from the region are up for prizes in Cannes in July.

In the short film category, Severen Pol [North Pole], a co-production between North Macedonia and Serbia, and Pa Vend [Displaced] from Kosovo are among a total of 10 films shortlisted from 3,739 reviewed.

Directed by Marija Apcevska, Severen Pol tells the story of Margo, a 16 year-old girl who feels isolated among her peers but believes she will fit in better if she loses her virginity.

Pa Vend, directed by Samir Karahoda, is the first film from Kosovo to be shortlisted at Cannes. Karahoda, who curates the short film programme at Kosovo's renowned documentary film festival DokuFest, also took Europe's youngest country to the Berlinale in 2019 with his documentary, Ne mes [In between].

Pa Vend tells how two table tennis enthusiasts in the southern Kosovo city of Prizren kept the game alive, with the local table tennis federation the first sports federation in Kosovo to be internationally recognised after the former Serbian province's declaration of independence in 2008.

From elsewhere in the Balkans, the Romanian-Belgium collaboration La Civil is one of 20 films shortlisted in the Un Certain Regard section. Directed by Romanian director Teodora Ana Mihai, La Civil follows Cielo and his search for his daughter who has been kidnapped by a crime cartel in Mexico.

From Central Europe, the Czech animated short film Rude Boty [Red Boots] will compete in the Cinefondation Selection. Created by Ana Padarova, the 14-minute film depicts a village party where the main character, Roza, waits to be invited to dance. After a stranger gives Roza a pair of red shoes, she becomes the centre of attention and...