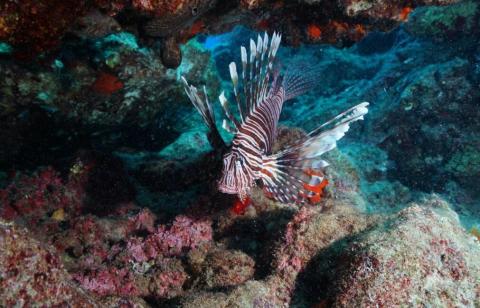 The water temperature in the Mediterranean Sea is increasing 20 percent faster than other seas and oceans due to the effect of global warming, said an international environmental protection association, adding that alien species invaded the Mediterranean waters by entering through the Suez Canal.

A new report of the World Wide Fund for Nature (WWF) on the possible effects of climate change in the Mediterranean Sea is full of alarming findings.

Sea level will rise by more than one meter by 2100, and one-third of the population of the region will be adversely affected by this situation, according to the report titled "Effects of Climate Change in the Mediterranean."

Pointing out that local species will disappear due to rising temperatures and the tropicalization of the sea, the report also hints at the possible damage to the Mediterranean ecosystem due to the increase in the presence of invasive species.

"About 1,000 new invasive species, with 126 of them being fish species, have entered the Mediterranean Sea through the Suez Canal, resulting in up to 40 percent reduction in native species populations in some areas," it said in the report.

"Fish species are moving from the African coast in the south to warm northern waters. Today, almost 1,000 alien species have migrated to the warming waters of the Mediterranean, replacing native species," the report added.

Stressing that the increase in the number of jellyfish has destroyed most of the natural predators with the pressure of overfishing and negatively affecting the food chains throughout the basin, the report noted that jellyfish infestations in southern waters now occur every year and endure longer.

According to the report, Posidonia meadows are also threatened by...