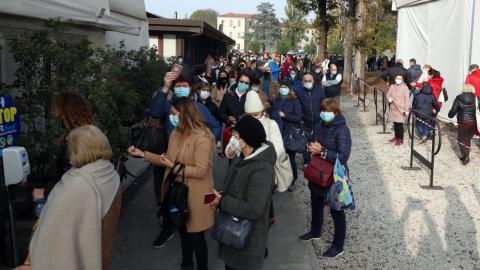 Moldova's Supreme Court of Justice on Tuesday told the Central Electoral Commission, CEC, to open 191 polling stations for diaspora voters, as the Foreign Affairs Ministry had asked, after a three-week internal political row.

The judges ruled that the CEC had abused its powers and opposed the Foreign Ministry proposal to open more voting stations for Moldovans abroad.

About a million Moldovans live and work abroad, split between Europe and North America and Russia, out of total 2.7 million population - and their results could tip the balance in favour of pro-EU forces seeking a majority in parliament.

Previously, the CEC wanted to open only 139, then 146 polling stations, despite the recommendations of the Foreign and European Integration Ministry, which sought no less than 191 for the early parliamentary elections scheduled for July 11.

The judges also criticized the CEC's arguments, which drew attention to the expiry of a deadline of 35 days from the date of the elections to establish polling stations abroad.

The recommendation of the Foreign Ministry was based on the prior registration of over 100,700 Moldovan citizens for the elections, compared to only 63,000 in the November 2020 presidential elections.

Back then, the number of Moldovans from abroad who voted was over 263,000, a record for Moldova. Over 92 per cent of these votes, in the second round, went for Maia Sandu who ultimately won the elections. Sandu led the pro-European Action and Solidarity Party, PAS, until she became the President.

However, long queues formed outside all the polling stations in Europe, and tens of thousands of citizens could not exercise their right to vote due to the schedule or an insufficient number of ballots.