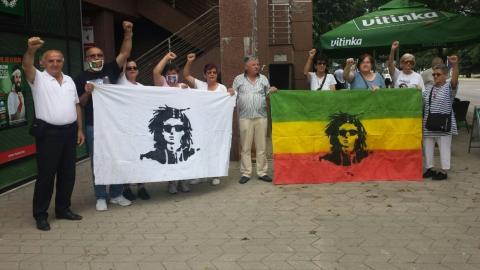 "They banished us just because we were members of 'Pravda za Davida' and because we sought the truth about the killed youngster," Testen said prior to his hearing in court.

David Dragicevic went missing in Banja Luka on March 18, 2018. His body was found on March 24. His unsolved death, as well as police and prosecution attitude, sparked protests, which have continued, alongside numerous court processes against citizens and institutions in Republika Srpska, RS, the Serb-led entity of Bosnia.

Over the past two years dozens of Banja Luka activists have had similar experiences to Testen's.

Data made available to BIRN collected by the Pravda za Davida group suggest that at least 160 misdemeanour or criminal complaints have been filed against Banja Luka citizens for violating the Public Order Law and the Law on Public Assemblies. The Basic Court has rejected all complaints it has considered so far.

Some cases have been discontinued because the Ministry of Interior in Republika Srpska, MUP RS, has given up on them.

Due to such treatment, the activists demand accountability from the competent police and their superiors and have filed criminal complaints - but there is no confirmation that anyone has been sanctioned so far for filing dozens of...