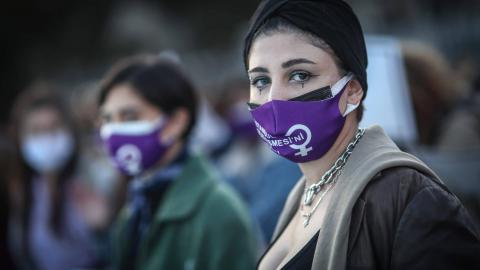 A woman shouts a slogan during a protest against Turkey's withdrawal from the Istanbul Convention, in Istanbul, Turkey, 2 April 2021. Photo: EPA-EFE/SEDAT SUNA

"Turkey and Poland have recently come to the fore in European politics and attracted international attention with their striking parallels in terms of authoritarian, populist, and undemocratic regimes," the report, entitled "The Istanbul Convention, Gender Politics and Beyond: Poland and Turkey", said.

It added that the ruling parties in male-dominated Turkey and Poland have adopted similar policies, targeting the rights of minorities and women, fostering religious and conservative values, attacking the media and discrediting the rule of law.

The Council of Europe's Convention on Preventing and Combating Violence Against Women and Domestic Violence, known as the Istanbul Convention, is a human rights treaty intended to address violence against women and domestic violence. It was opened for signatures in May 2011 in Istanbul, Turkey.

Turkey was the first country that ratified the treaty, but Islamist and conservative critics claimed that it undermined traditional family values and, ironically, Turkish strongman Recep Tayyip Erdogan then withdrew his country from the treaty, which will come into force on July 1.

Repeated calls for Turkey's return to the convention have been dismissed by the government.

In both countries, the report notes, violence against women and LGBT groups are major problems while in Turkey femicides and in Poland abortion have become recent major hot topics.

"Both countries' official strategy for preventing violence is family mainstreaming instead of recognising and adequately addressing the gendered dimension of violence," Cemre Baytok, a human...