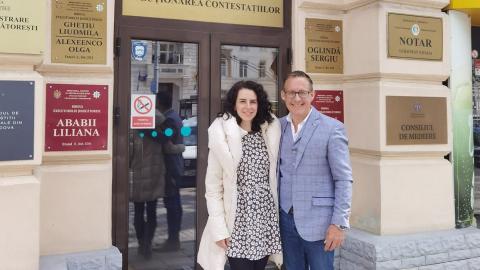 Europe's poorest state, Moldova has some 41,800 abandoned children, according to official data, many of them the unwitting victims of an exodus of Moldovans looking for work abroad. Most are left with relatives, but a small minority is abandoned altogether.

Some 300 are taken care of in 51 Baptist-run houses scattered across the country of 2.6 million people, who, like Zoe, speak Romanian. Zoe, 40, and Chris, 50, are now part of a team of volunteers, helping with fundraising, teaching and training.

Living and working in the village of Pohrebeni, north of the capital Chisinau, the couple has an ambition to double the number of houses caring for abandoned children.

"The trust has been broken for many of these kids. We want to restore it," said Chris.

With state institutions full to capacity, Mariana Ianachevici, executive director of the Chisinau-based NGO 'AVE Children', said Moldova should streamline the procedure of accrediting such non-state centres for abandoned children. The situation has improved, she told BIRN, but more needs to be done.

A big Gorila together with humanitarian aids consisting of toys, clothes, and other stuff were brought in Moldova from England for the abandoned children. Photo: Chris Lomas Facebook Page

"Moldova has made enormous strides in reforming the care system," said Ianachevici. "You can't imagine what this field looked like 15-20 years ago, but there is still a lot to do until the final step."

The state employs some 414 so-called 'parental assistants' to provide care for such children, but Ianachevici said it was not enough given there are more than 1,600 children without any form of guardian at all. "It is a small number,"...