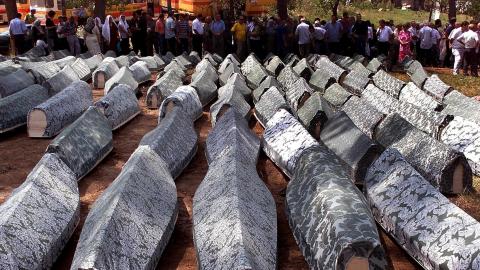 The case against Jovica Stanisic and Franko Simatovic, both former Serbian State Security officials, whose first-instance verdict will be handed down on June 30, deals extensively with the role of Serbian paramilitaries in the break-up of Yugoslavia.

Other trials, throughout the two decades of the ICTY's operations, probed how these units were set up, who commanded, trained and funded them, and what were the patterns of their violent engagement.

While much has been already uncovered by academic and journalistic research, differences between various units and patterns of paramilitary violence at the local level - from Vukovar in Croatia, to Sanski Most, Kljuc, Doboj, Bosanski Samac, Visegrad and Zvornik in Bosnia and Herzegovina, to Podujevo/Podujeva or Cuska/Qyshk in Kosovo - remain unclear. Beyond Arkan's Tigers and the Scorpions, whose actions are more widely known, the perpetration of violence by others is still opaque.

The extensive records, and millions of pages of transcripts, witness statements and other documents from trials held in The Hague can help explain the similarities and differences between victimisation by paramilitary units, of innocent civilians in these towns and villages.

What happened in two Bosnian towns, Bosanski Samac and Visegrad, shows that paramilitary units supporting the Bosnian Serbs in pursuit of their political goals were different from one another, and perpetrated different kinds of violence.

The research this article is based on was...