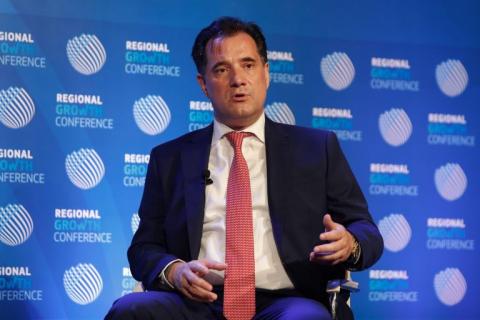 Greek Development and Investments Minister Adonis Georgiadis was the keynote speaker at a virtual Foundation for Economic & Industrial Research (IOBE) on Thursday entitled "Industrial Policy and the New Economy", where he repeated that the current government is pre-eminently "pro-business".

"We want to reverse the manner in which the Greek economy operated up until now… we now have a (Greek) government that is willing; a European Union that wants to provide the proper incentives, and a Greek people that, of course, has matured and understands that the habits we had in previous decades were often negative for the economy and the people themselves," he said.

Pointing to an example, he said production of anti-septic liquids in Greece prior to the pandemic was 240,000 kilos, while a month into the public health crisis production had reached 1.5 kilos, covering 100 percent of the country's needs during the period.

He also said another result of the pandemic is that EU member-states realized that production lines by European countries outside the continent were not often a good idea.