The Hellinikon Project is now signed 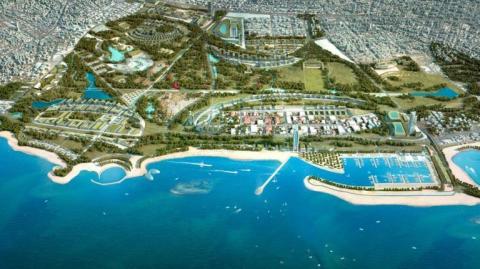 Perhaps the most historic project of the recent years was signed a short while ago. The investment of Hellinikon Project was signed and got off the ground just a few hours ago, after 7 years of waiting and almost 20 years from the day the old airport of Athens stopped operating. The most emblematic project of HRADF entered today a new era and the huge investment of a total of 7 billion euros has just begun.

The signature of the Fund and the HELLINIKON GLOBAL I SA, a subsidiary of LamdaDevelopment, of the Private Share Transfer Agreement (STA) for the acquisition of 100% of the share capital of the company "Hellenic SA", marks the beginning of the project that is meant to change officially the image of Attica in the next decade. The signing was accompanied by the payment of the first installment of the price of 300 million euros, as well as a letter of guarantee of 347 million euros.

The transfer of the shares of "Hellenic SA" signed by the Executive Director of HRADF, Mr. Panagiotis Stampoulidis and the CEO of Lamda Development, Mr. Odysseas Athanassiou, marks the beginning of the development of the former Hellinikon Airport and of the Agios Kosmas coastal area as well as the beginning of the biggest urban regeneration in Europe.

The Executive Director of HRADF, Mr. Panagiotis Stampoulidis stated: "Almost ten years have passed since the beginning of the HRADF competition for the Hellinikon Project in 2012. Today's signing seals the...