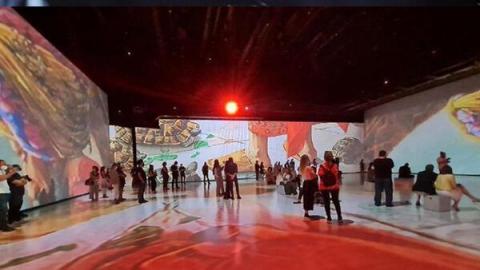 The Parallel Universe Exhibition, organized by Ouchhh and which combines artificial intelligence and art, is opening to art lovers in Istanbul.

Speaking at the opening of the exhibition, actor Mert Fırat, one of the founders of DasDas Sahne, said that they set out with Ferdi Alıcı to realize this dream four years ago.

"It is very important for us to turn DasDas into such a digital exhibition space. Just when we were so disconnected from art due to the pandemic, when people were so far away from each other, we found a common ground where many different disciplines can be presented with the power of artificial intelligence and art. This interdisciplinary journey has already inspired many people and I hope it will continue to do so."

The director of the exhibition, new media artist Alıcı said, "The works here are actually a selection from the retrospective works we have done over the last 10 years. When you first enter the exhibition, you see the work of 'Poetic Artificial Intelligence' that we realized in Paris in 2018. Nearly 1 million people saw this exhibition in Paris, the center of traditional art, for nine months."