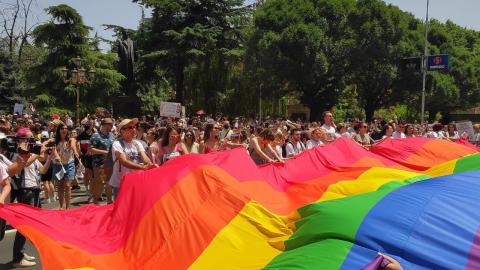 Thousands of people attended the Pride parade in North Macedonia's capital on Saturday, which started at noon in the park in front of the national assembly in the centre of Skopje.

Livening up the otherwise sun-drenched and almost deserted city streets, the parade's participants and supporters strolled through the city centre and gathered in Skopje's main park.

There, the party continued with musical performances by DJs and artists, including this year's North Macedonian contestant at the Eurovision Song Contest, Vasil Garvanliev.

As in the historic first Pride event held in 2019, this year's event has won support from top government and city officials, ambassadors and activists and organisations abroad, some of which personally joined in.

This year's event, organised by the National Network Against Homophobia and Transphobia, was held under the slogan "Outside the Walls". The slogan was picked to emphasise the isolation and the need to conceal  identities in the confines of private spaces that so many members of the LGBT community experience.

It comes after no parade was held last year due to COVID-19 concerns, when activists opted for a series of virtual, online, events instead.

Under a scorching sun, people started the march in central Skopje. Photo: BIRN

Music and dancing were part of the show. Photo: BIRN