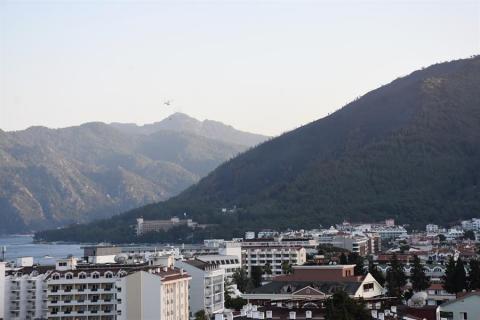 A forest fire that broke out in Turkey's southwestern Muğla province on June 27 has been brought under control, said a local official.

"The fire is now under control. Teams continue cooling work from air and land in the region," Orhan Tavlı, the Muğla governor, told Anadolu Agency.

For reasons unknown, the fire broke out in forestland close to hotels and settlements in İçmeler in the Marmaris district of the coastal province.

Many forest workers and firefighters as well as six helicopters, sprinklers, bulldozers, and water tankers battled flames that the wind helped quickly spread over the region.

A forest worker died while battling the forest fires along with firefighters, Tavlı also said.

According to Muğla Regional Directorate of Forestry, the forest worker was 38-year-old Görkem Hasdemir.

Vice President Fuat Oktay on Twitter shared a message of condolences over Hasdemir's death and wished Allah's mercy on him.