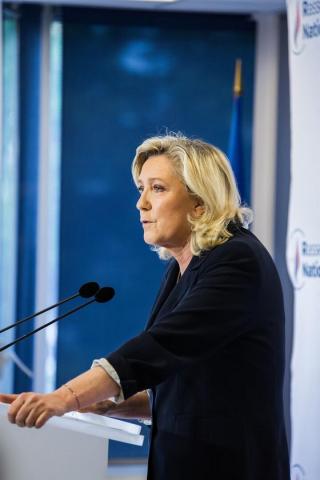 The French far-right again failed to win a single region in elections on June 27 exit polls showed, depriving its leader Marine Le Pen of a chance to show her party is fit for power ahead of next year's presidential election.

The southern Provence-Alpes-Cote d'Azur (PACA) had been seen as the far-right Rassemblement National party's best opportunity to secure its first-ever regional power base, but parties from the left to right united in a "republican front" to keep it out.

In what was also a humiliating election night for President Emmanuel Macron, his party failed to win a single region. However, a government source said that while a reshuffle was not on the cards, a few adjustments were possible.

In Provence, initial exit polls by IFOP and Opinionway showed the incumbent conservatives triumphing by a margin of roughly 10 points in the run-off vote

"This evening we won't win in any region because incumbents entered into unnatural alliances and did all they could to keep us out and prevent us from showing the French our capacity to lead a regional administration," Le Pen told supporters.

Le Pen blasted the government for a disastrously organized vote after roughly two in every three voters abstained.    The results raise questions over how successful Le Pen's strategy of softening the image of her anti-immigration, euro-skeptic party to try to eat into the traditional right's vote has been.

Even so, analysts say the apparent failure of Le Pen and her party to win in two of its strongholds should not be extrapolated on to next year's presidential election.

The exit polls showed that the vote was won in each of France's 13 regions by the incumbent...