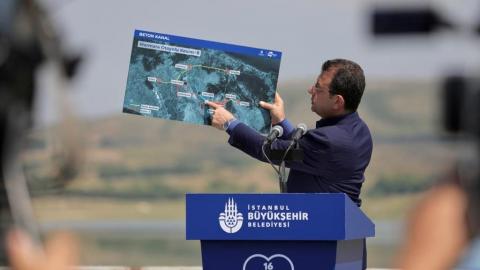 Imamoglu, from the main opposition social democrat Republican People's Party, CHP, which won Istanbul from Erdogan's ruling Justice and Development Party, AKP in 2019, said that experts' concerns about the mega-project must be heeded.

"More important than everything else, we are listening to the loud objections from leading scientists. We never heard a scientist saying 'This project is beneficial'. This alone proves that the project is a disaster," Imamoglu said in a written statement to BIRN.

"I was elected by people to resist this cement canal," he added.

Canal Istanbul is planned to be a 45-kilometre artificial waterway linking the Black Sea and the Sea of Marmara.

But its opponents have warned that the project threatens the city's water supplies and risks wider environmental consequences amid the delicate balance between the interconnected seas in the area, which are already suffering a problem with 'sea snot'.

Erdogan hailed the Canal Istanbul project at a ground-breaking ceremony on Saturday.

"This going to be a brand-new page in Turkey's development. On the path to this development, we will leap forward," Erdogan said at the ceremony.

"We consider Canal Istanbul to be a project to save the future of Istanbul," he added.

But Imamoglu dismissed the ceremony as a sham.

"The bridge that they say will be the first construction site of the canal is actually part of a motorway project which has been on paper for years," he said.

Opposition party leaders have said that they will stop the project when they come to power.

"No company should bid on the project...

Turkish firm on track to be first B2B unicorn