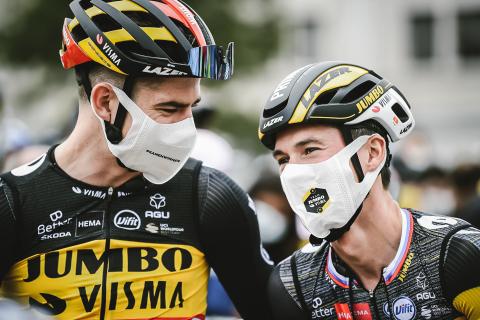 Brest – Slovenian cycling stars Primož Roglič (Jumbo-Visma) and Tadej Pogačar (UAE Team Emirates) placed third and sixth, respectively, in stage one of this year’s Tour de France on Saturday, which saw two major crashes. Both Slovenians seem to have dodged any serious injuries stemming from the collisions. The stage was won by France’s Julian Alaphilippe.

The first massive crash occurred some 50 kilometres before the finish line when a spectator waving out a cardboard banner into the road knocked down most of the peloton, including Roglič and Pogačar.

Jumbo-Visma’s Tony Martin was the first to collide with the sign, knocking down a number of other riders as well, the first among them being his teammate Roglič, who hit the tarmac hard. The pile-up completely closed off the road for most of the riders and the few who managed to escape it waited for those caught up in it.

The incident was followed by an even more brutal crash which happened some six kilometres before the finish line during a rapid descent.

The second stage will play out on Sunday when the riders face the famous Mur de Bretagne climb.

EU at "the turning point": Is there any doubt in the United States?
Chief of Defence Staff atttends NATO Military Committee, in Greece, discusses terrorism, hybrid warfare