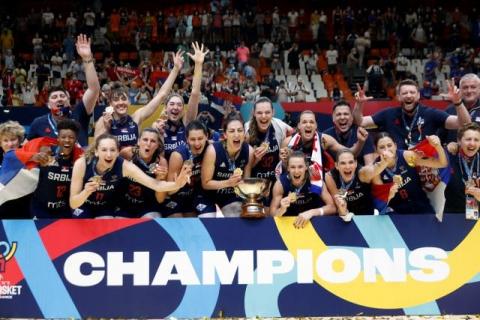 The Serbian team defeated France 63-54 in the Women's EuroBasket final in Valencia in Spain on Sunday to win the European championship for a second time, after a six-year gap.

France had been widely tipped as likely winners, but Serbia's coach Marina Maljkovic said after the victory that her team deserved the trophy.

"We played like warriors. Our country is small, but it is a country of real warriors," Maljkovic was quoted as saying by the Basketball Association of Serbia's website.

Thirty-two-year old Serbian Sonja Vasic was named the best player of the tournament.

The triumph sparked joy among Serbian fans on social networks and, for one night at least, pushed the European football championship into the background.

The Serbian team won its first Women's EuroBasket championship in 2015, again beating France in the final.

The team will be welcomed home at 8pm on Monday in front of the Belgrade City Assembly.