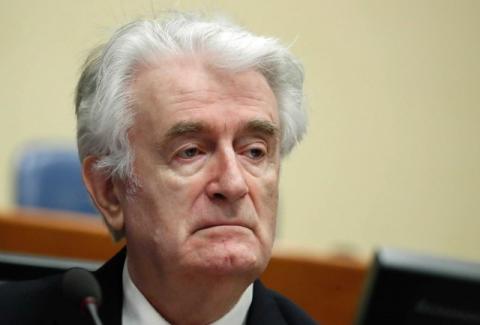 The letter points out, as he stated, the disastrous action of ad hoc courts.
In the letter, Karadzic pointed out that he was addressing them in order to inform them about "the greatest shame that was done in their name, obviously without their consent, and probably also knowledge" and pointed out that hundreds of innocent Serbs were serving sentences far from their country and were deprived of facilitated and regular contacts with families, which, as he emphasized, is contrary to UN General Assembly Resolution 70/175, known as the "Nelson Mandela Rules".
According to him, "even in the time of the greatest dictators, not so many innocent people with such a perfidious mask of justice were imprisoned."
Karadzic assessed that "the most perfidious imperial game is taking place in front of the whole world, no less dangerous than the one that Hitler played with Czechoslovakia on the eve of the Second World War, but even more perfidious."
According to RTRS, he stated that "the most malignant mass manipulation" is taking place after the wars in the former Yugoslavia "with the perfidious abuse of many institutions of civil society and the international order" and warned that the idea of ​​international justice is forever endangered.
"It is no wonder that some great powers, by persecuting and imposing such ad hoc courts on other states, do not cooperate with such courts, except with prosecutors' offices to accuse representatives of small nations," Karadzic believes.
He added that such courts violate many laws and regulations by, as he stated, avoiding the usual procedures and openly bowing to one of the warring parties.
"Such a court undermines even UN documents, such as UN General Assembly Resolution 70/175, known as the 'Nelson...