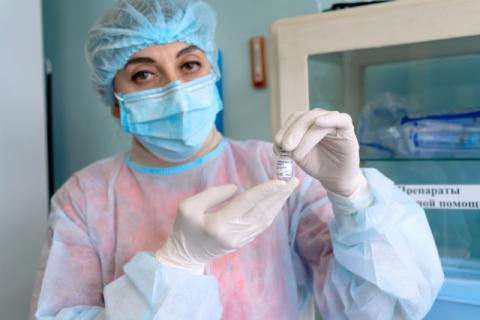 The Russian Direct Investment Fund (RDIF) on Tuesday announced that the efficacy of its Covid-19 vaccine Sputnik V in the United Arab Emirates (UAE) was confirmed at 97.8 per cent among over 81,000 people.
In a statement, the RDIF said that UAE's Ministry of Health confirmed the safety and high efficacy during the vaccination campaign. "Efficacy among more than 81,000 subjects who had received both components of Sputnik V was 97.8 per cent. Analysis is based on the data collected by June 8, 2021," said the RDIF. In addition, the Russian Covid vaccine was fully effective against severe infections and there were no adverse events associated with vaccination.
Sputnik V was registered in UAE in January 2021 under the emergency use authorisation procedure.
"Sputnik V complies with the highest healthcare standards while demonstrating safety and efficacy during the vaccination in UAE. Sputnik V is one of the best COVID vaccines in the world as confirmed by data from Argentina, Serbia, San-Marino, Bahrain, Hungary, Mexico and other countries. Administering the Russian vaccine helps create durable immunity among the population and provides for lifting the restrictions and returning to normal life," said Kirill Dmitriev, RDIF CEO.
To date, Sputnik V has been registered in 67 countries globally with a total population of over 3.5 billion people. The data obtained by regulators of a number of countries during the vaccination of the population, including Argentina, Serbia, Bahrain, Hungary, Mexico and others, demonstrates that Sputnik V is one of the safest and most effective vaccines against coronavirus.
An earlier statement said that Sputnik V is based on a proven and well-studied platform of human adenoviral vectors and uses two different vectors for the...

LGBTIQ Rights Should Be Defended across the Bloc, Same-Sex Marriages to Be Allowed in all Member States
Biro Rozalia, at Polish Economic Forum: We need to develop Carpathians brand