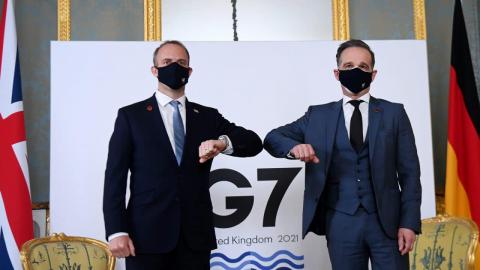 During their meeting in Berlin, British Foreign Secretary Dominic Raab and German Foreign Minister Heiko Maas signed a joint declaration in which, among other things, they reaffirmed their countries' commitment to the security, stability, prosperity, and full sovereignty of the six Western Balkans countries, as well as to their European and Euro-Atlantic paths.

"We emphasise the importance of advancing the rule of law and we commit to working closely together to support the Western Balkans countries in promoting regional cooperation, tackling corruption and organised crime, especially illicit finance, and to addressing legacy issues of the past, notably Missing Persons, including in the context of the Berlin Process," stresses the joint declaration issued today after their meeting.

The support from these two leading European powers comes after last week's meetings of EU ministers during which two of the Western Balkans countries, Albania and North Macedonia, once again failed to receive the green light for starting their much expected EU accession talks.

The reason, which remains the same as it was in the autumn of last year, is the Bulgarian blockade of neighbouring North Macedonia amid their bilateral dispute over history. Sofia insists that Skopje should accept the supposed Bulgarian origin of the Macedonian language and nation.

Due to the insistence of the vast majority of EU members that the two countries should move forward in one package, Albania continues to feel the overarching effects of the Bulgarian blockade.