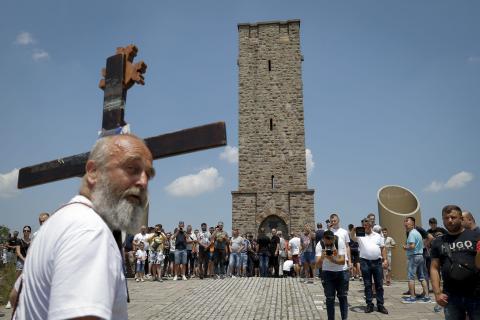 The Kosovo prosecution accuses Jovanovic of the criminal offence of "inciting discord and intolerance".

The court said that at a monument in Gazimestan, he intentionally "incited and spread public hatred, discord and intolerance between ethnic and religious groups living on the territory of the Republic of Kosovo".

Jovanovic told a court hearing that he denied the claims he didn't come to Kosovo to spread hatred in public.

He was arrested during the annual Vidovdan gathering at the Gazimestan monument near Kosovo's capital, Pristina.

Vidovdan (St. Vitus Day) is an important religious date for Serbs as it's also when Ottoman forces defeated the medieval Serbian kingdom in the 1389 Battle of Kosovo.

Montenegrin media reported that Jovanovic was arrested when he objected to Kosovo special police forces asking an Orthodox nun to open her bag.

Kosovo media reported that he was among a group of citizens who were chanting "Kill an Albanian", "We will wash Kosovo with blood" and "Kosovo is Serbia".

Montenegro's Foreign Ministry said that minister Djordje Radulovic will keep in contact with the Kosovo authorities over the Jovanovic case.

"Radulovic will talk to Kosovo's Foreign Affairs Minister Donika Gervala about how to take this case out of politics and into the realm of law and protect Jovanovic's rights," the ministry said on Wednesday.

The largest coalition in Montenegro's ruling majority, the pro-Serb Democratic Front, has called on the government to demand the immediate release of Jovanovic.

"If the Montenegrin government keeps silent about this scandal, and if Jovanovic is not released immediately, the...