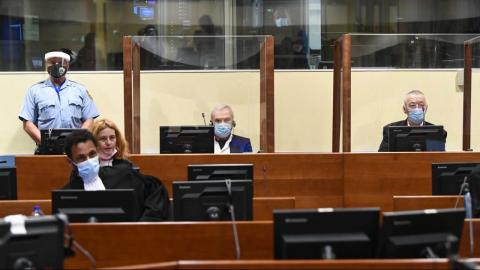 The former chief of Serbian State Security, Jovica Stanisic, and his deputy Franko Simatovic, were sentenced to 12 years in prison each on Wednesday by the International Residual Mechanism for Criminal Tribunals in The Hague for aiding and abetting the commission of wartime crimes in the Bosanski Samac area of Bosnia in 1992.

The two men, both powerful and widely-feared figures in Slobodan Milosevic's regime in Serbia in the 1990s, were found to have assisted fighters from the Serbian State Security's Special Operations Unit, an armed police force known as the Red Berets, who committed the crimes.

"The trial chamber is satisfied that the accused provided practical assistance, which had a substantial effect on the commission of the crimes of murder, forcible displacement, and persecution committed in Bosanski Samac, and were aware that their acts assisted in their commission," said presiding judge Burton Hall.

"Accordingly, the trial chamber finds them criminally responsible for aiding and abetting the commission of the crimes in Bosanski Samac," he added.

But the judge said there was not enough evidence to convict them of planning, ordering or aiding and abetting any other crimes committed by Serb units during the wars in Croatia and Bosnia, as the indictment had claimed.

Stanisic and Simatovic were being retried for alleged participation in a joint criminal enterprise whose aim was the forcible and permanent removal of the majority of non-Serbs, mainly Croats and Bosniaks, from large areas of Croatia and Bosnia and Herzegovina in the period from 1991 to 1995.

They were accused of having "directed and organised the financing, training, logistical support and other substantial assistance or support" for Serbian State...