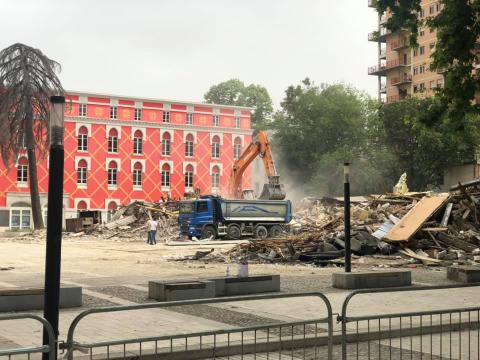 After three sessions, the Constitutional Court in Tirana has suspended the legal initiatives that paved the way for construction of a new National Theatre undertaken by the government and the Municipality of Tirana until the court issues a final decision on the issue.

The old National Theatre was demolished in May 2020, after three years of protests by activists.

After the request of President Ilir Meta, the Constitutional Court suspended the law passed in 2018 that determines "a special procedure" for construction of a new National Theatre. The court also suspended a decision of the Council of Ministers, the government, in 2020, which transferred ownership of the theatre to the Municipality of Tirana.

However, the court could not reach a majority ruling with five votes on the final decision to suspend the municipality's move to demolish the National Theatre.

Mayor of Tirana Erion Veliaj welcomed the court decision, saying it had decided in favour of the municipality and that it "upholds the decision to demolish the theatre".

The court found that the special procedure law violated freedom of economic activity and that the decision of the Council of Ministers violated the principle of the rule of law.

Proceedings on the National Theatre must now halt until the court issues a final ruling. The court held three sessions, and the last one, on June 16, lasted about 12 hours.

Three days before the court decision, mayor Veliaj assured the public that permission from the National Agency of Territorial Planning for the construction of a new theatre had been approved. This claim met strong criticism, as the case was still before the Constitutional Court.

The old theatre was demolished in May 2020, after long protests...