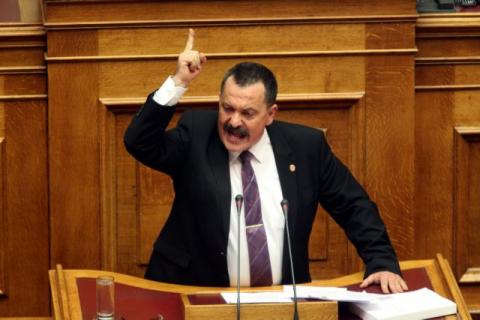 Christos Pappas of the now defunct far-right Golden Dawn party was no run of the mill cadre of former party leader Nikos Michaloliakos.

He was the self-styled "theoretician" of the group. Even "his own" people referred to him as [top Nazi Hermann] Goering and his parliamentary presence was marked by his outrageous audacity.

Protected by parliamentary immunity, Pappas cursed at Manolis Glezos [a national icon who bravely removed the Nazi flag from the Acropolis during the German occupation], calling him an "old geezer" and a "Stalin-Evzone" [Nazi collaborator].

He played a leading role in attacks against the organisers of the theatrical play "Corpus Christi" and in the process freed a troublemaker from a police bus.

Pappas verbally attacked then finance minister Yannis Stournaras (who is currently Governor of the Bank of Greece) during parliamentary debate on Greece's third bailout memorandum, blurting out with a horrid tone of voice, "You will listen to me…Do you know that little song 'Don't cry for me Argentina'?"

He sued author Petros Tatsopoulos (then a SYRIZA MP) because he referred to Golden Dawn MPs as "pimps".

He is the man described by his fellow MPs as the darkest div ever to serve in Parliament and who promoted himself as the "number two" of the nationalist grouping and as co-founder, along with Michaloliakos, of the Golden Dawn party.

Nikos Pappas was a statewide MP of the self-declared nationalist alliance, and the owner of a furniture store in Ioannina, who described himself as an "ideologue".

What kind of ideologue?

For example, in the Golden Dawn magazine entitled "Antepithesi" [counter-attack, issue 20] (which at the time offered a scarf featuring the ancient...