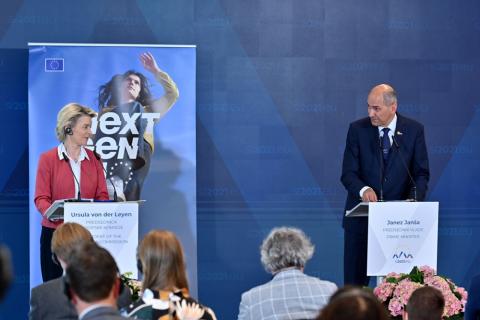 Brdo pri Kranju – Rule of law was one of the main topics discussed during Thursday’s visit by the College of Commissioners. European Commission President Ursula von der Leyen said it was important to always respect the rule of law and European values. Prime Minister Janez Janša said that in a rule of law, final decisions are in the hands of courts.

“This civilisation does not exist without rule of law. But in a rule of law, courts always have the final say in disputes,” Janša said.

“We have problems with independence of courts in Slovenia, we acknowledge that and we’ve never concealed it. We discussed this today in an intensive debate with the European Commission.”

According to Janša, the fundamental problem with rule of law in Slovenia is that “we have largely not satisfied the recommendations that we got when we entered the EU.”

“We asked the European Commission today to help us with that – how to satisfy the recommendations so that we are not accused of violating the independence of the judiciary,” he said.

Von der Leyen said trust was the EU’s most valuable asset. This includes trust in an independent judicial system and in independent media, with sufficient financing.

She said democracy and the rule of law were never a concluded process, it involves a permanent effort to achieve a rule of law status befitting a democracy.

The EU Council presidency has an important role to play in questions of the rule of law, she said, noting that the Commission would prepare rule of law reports for member states by the middle or end of July.

Janša said that the debate at last week’s EU summit had been heated but that parents’ right to raise their children needed to be respected, as do historical differences between member states. He said Slovenia could play the role of broker.

Von der Leyen, on the other hand, said the debate was never about parents’ rights, it was about respecting minorities such as the LGBTQ community.

Respect of minorities is enshrined in the Lisbon Treaty and as guardian of the treaties, the Commission would demand a formal explanation from Hungary regarding the protection of minorities.