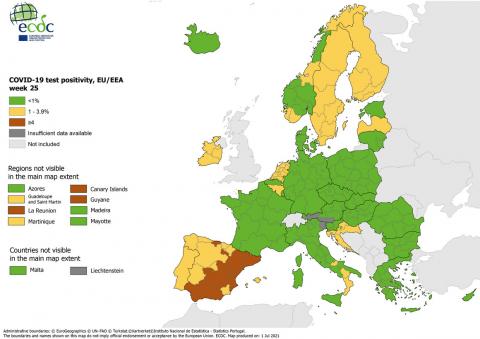 Stockholm – As of Thursday, Slovenia is fully green on the map of the European Centre for Disease Prevention and Control (ECDC), as the western part of the country joined the eastern part, which made it to the green list last week.

Being put on the green list of the ECDC are countries, regions or territories where the 14-day incidence of coronavirus infections per 100,000 residents is below 50 and the share of positive tests in all tests below 4%.

The incidence may be up to 75, but in that case the positivity rate must be below 1%.

These criteria are now fulfilled by the entire Slovenia, where the 14-day incidence in the period until 27 June, according to the ECDC, is approximately 40 per 100,000 residents.

Also green on the list is a majority of the EU member states, with the exception of Portugal, parts of Spain, Ireland, Latvia, around half of Sweden, a third of Finland and the majority of Belgium and the Netherlands.

The map based on data reported by member states represents the basis for recommendations of the EU Council regarding non-essential travel within the EU during the Covid-19 pandemic.