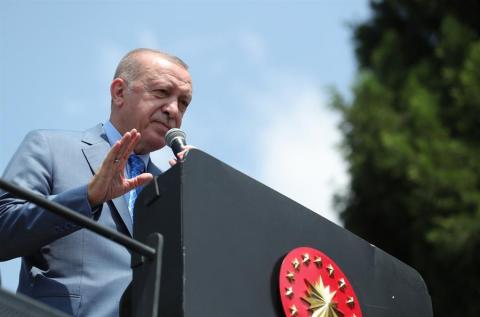 Turkey will persevere its rights in the eastern Mediterranean and will continue its exploration activities for the hydrocarbon resources in the area, President Recep Tayyip Erdoğan said on July 2.

"We are in Libya, we are in Azerbaijan, we are in Syria, we are in the eastern Mediterranean, and we will continue to be," he said, speaking at the Tank and Pallet Factory in the northwestern province of Sakarya.

"Whatever our rights are, we will get them. We will continue our oil exploration activities in the eastern Mediterranean and Cyprus," he added.

Erdoğan reminded he would visit Cyprus on July 20 to mark the 46th anniversary of the Cyprus Peace Operation.

A 2019 Turkish deal with Libyan officials aimed to boost Turkish maritime rights and influence in the eastern Mediterranean angered regional countries, including Egypt and Greece, which responded by signing a separate deal to delineate their maritime boundaries.

Turkey has carried several drilling missions in the region till the end of 2020, rising tension with Greece and the EU. Greece claims that its islands also have their exclusive economic zones (EEZ), saying they reduce Turkey's zone in the region.

But the confronting sides calmed down tension as of 2021 as Turkey withdrew drilling vessels in the eastern Mediterranean and launched a military and political dialogue process with Greece.

Erdoğan, meanwhile, responded to the opposition parties' criticisms towards the government over the privatization of a national tank factory.

Elaborating on details of the transfer of the right to operate Turkey's national tank factory to the BMC Turkish-Qatari venture for 25 years, Erdoğan said 49 percent of the shares are at Qatar, but 51 percent is at the...