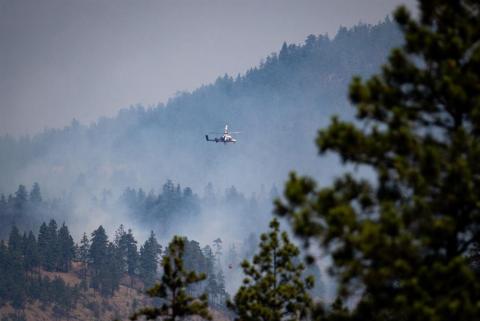 Ottawa prepared on July 2 to send military aircraft and other help to evacuate towns and fight more than 100 wildfires in western Canada fueled by a record-smashing heat wave.

According to wildfire officials, at least 152 fires were active in British Columbia, 89 of them sparked in the last two days. Most were caused by lightning strikes.

The fires were located north of the city of Kamloops, 350 kilometers (217 miles) northeast of Vancouver.

Experts believe the heat wave, which has triggered extreme heat alerts in areas where millions of people live, is caused by global warming. The heat has killed more than 700 people in Canada and at least 16 in the United States.
Prime Minister Justin Trudeau met Friday afternoon with an incident response group that included several ministers. He said he had already spoken with British Columbia's premier, as well as local mayors and indigenous chiefs in communities under threat.

"We will be there to help," he told a news conference.
The response group announced it would set up an operations center in Edmonton, where armed forces will be able to provide logistical support. Military aircraft were also deployed to help.
"The dry conditions and the extreme heat in British Columbia are unprecedented," said Public Safety Minister Bill Blair. "These wildfires show that we are in the earliest stages of what promises to be a long and challenging summer."
Roughly 1,000 people have already fled the wildfires in British Columbia, and authorities are searching for many who have gone missing.

The village of Lytton, 250 kilometers (155 miles) northeast of Vancouver, was evacuated Wednesday night because of a fire that flared up suddenly and spread quickly. Nearly 90 percent of the village...