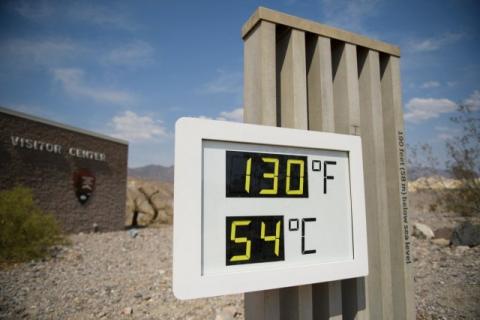 Canada has been going through a record heatwave for the last ten days, which has killed hundreds of people in more than seven days and caused more than 150 forest fires across British Columbia.
In Lytton, a place with only 250 inhabitants, the maximum temperatures are usually around 25 degrees during June.
Canada broke its temperature record for a third straight day on Tuesday - 49.6C, in Lytton, British Columbia.

Last week, however, the nights were warmer than the usual average temperature for that month.
The inhabitants of that town do not have a lot of air conditioners, and their houses are actually designed to retain heat.
Now the fires have turned much of Lytton to ashes and forced its inhabitants to flee.
Experts say climate change is expected to increase the frequency of extreme weather events, such as heatwaves. However, linking any single event to global warming is complicated.

Scientists have been warning for decades that climate change will cause more frequent and stronger heat shocks.
We have just witnessed this in Canada, but also in many other parts of the northern hemisphere that are becoming less and less suitable for life.

In the northwestern United States, for example, roads melted this week, and New Yorkers were told not to use energy-intensive devices, such as washing machines, to avoid huge power demands.
The highest temperature in June was measured in Moscow on June 23 - 34.8 degrees.

38 degrees in the Arctic Circle