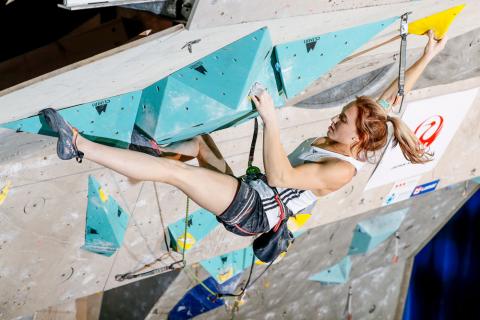 Ljubljana – Slovenia’s Janja Garnbret continues to excel at this year’s climbing World Cup, having won her fourth event this season in Villars, Switzerland on Saturday, which raises hope for the Tokyo Olympics, where she will be the country’s main contender for gold.

“My first impression after the event are great. I can’t remember the last time I climbed all four routes at an event. I think it was a truly perfect weekend. I enjoyed myself, and felt good,” said Garnbret, adding she was happy with her performance, including her speed.

“I broke my personal speed record, going under eight seconds for the first time, and got yet another confirmation in the difficulty level, which is a great sign for Tokyo,” she said.

Out of the eight finalists in Villars, four were Slovenian. Vita Lukan was fifth, and Lučka Rakovec and Mia Krampl sevenths and eight, respectively.

Italian Laura Rogora was second and Natalia Grossman from the US was third.

Garnbret will not compete in the next two World Cup events in Chamonix and Briancon, France, to prepare for the Olympics. “I look forward to just being home the last three weeks before the Olympics, training, working on the details, so I’m looking forward to leaving for Tokyo and competing at the Olympics,” said Slovenia’s best climber.