CHP leader says he is not afraid of losing immunity 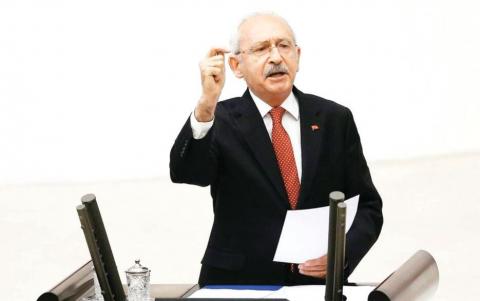 The Turkish Presidency has submitted a motion to parliament seeking the removal of the parliamentary immunity of 20 deputies, including Kılıçdaroğlu.

The presidential motion was sent to a parliamentary panel comprised of the members of the constitutional and judicial commissions. It will be brought before the General Assembly in case the panel takes an action on the removal of immunities.

The motion includes 15 MPs from the Peoples' Democratic Party (HDP), and one each from the İYİ (Good) Party, the Democrat Party (DP), the Workers' Party of Turkey (TİP) and the Democratic Regions Party (DBP).

Reflecting on the motion sent to parliament, in his video Kılıçdaroğlu claimed that the government wants to send him to prison "because they want you to be afraid."

He noted that the motion seeking the lifting of his immunity was forwarded to parliament within a week.

Kılıçdaroğlu said that he is willing to pay any price and he is not afraid of the prospects of losing his immunity, noting that he continued his struggle despite all the hardship he faced over the past decade.

Addressing the young people, the opposition leader said that the political climate should not intimidate them.