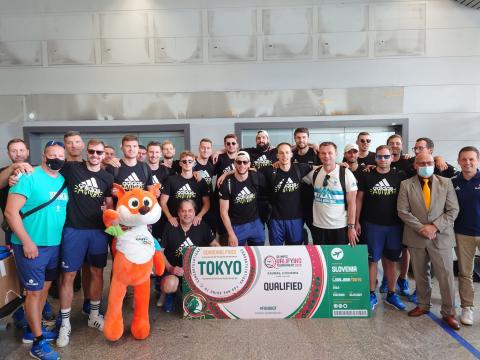 Brnik – Having qualified for the Olympic basketball tournament for the first time in Slovenia’s history, the national basketball team say they are not going to Tokyo just to participate, they are aiming for the top places.

“We’re definitely not content just going to Tokyo. I think that our rivals can fear us, even though our group is difficult,” guard Zoran Dragić, who plays for the Spanish club Kirolbert Baskonia, said as the team arrived in Ljubljana on Monday fresh from their Olympic qualifying tournament in Lithuania.

Captain Edo Murić said the team would give it their best in every game. “There are teams we can defeat. I hope we beat many,” the Cedevita Olimpija small forward said.

“You can expect twelve guys who fight and breathe for each other, and respect one another,” added Jaka Blažič, the Cedevita Olimpija shooting guard.

Slovenia beat Lithuania yesterday to win one of only twelve berths at the Olympic Games. In Tokyo, they face Spain, Argentina and Japan in Group C.

Former player Rašo Nesterović, the secretary general of the Slovenian Basketball Association, said this was another milestone for Slovenian basketball after the European champion title in 2017.

“The work does not end here. With the right approach, we can come far,” he said.